The 1911 census shows them as the children of George and Martha Chaloner.George was a 'waggoneer on a farm' and lived on Chester Road, Churton.

Percy began working at Sibbersfield in c1914. He remained at the Lodge until c1986. 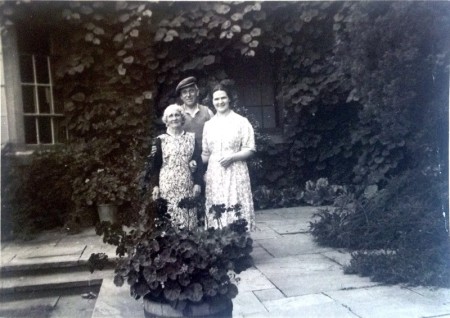 Sibbersfield Lodge was left by Mr Bushby for the use of the former gardener, Percy (and Florrie) Chaloner , until he chose otherwise. Prior to that, Percy had been living at Stable Cottage with his sister Florrie. Mr Bushby also left Percy ten thousand pounds in his will. 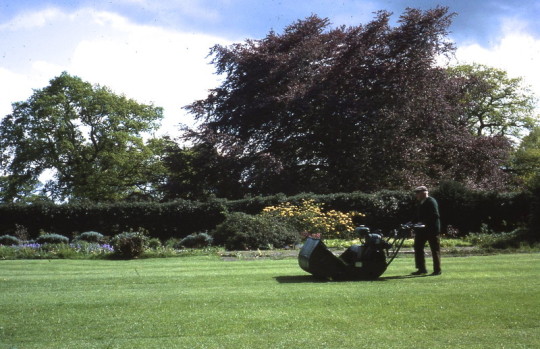 Percy Chaloner mowing the croquet lawn August 1976. Thanks to Will Parsons for capturing the moment.

The Murmansk Run - a long way from the The Long Walk

'Percy lived with his sister in the Lodge. He told us that during the war he was called up and served on the Arctic conveys going to Murmansk.

When he came back after the war Mr Bushby had let the lawns go unmown, except for a 3 feet wide path mowed down the long walk and round the end!

Percy was always delightful to talk to and always looked well groomed.'

'Of all the Bushby employees Percy was the one who I really took to. He was the one who very genuinely doted on both Mr & Mrs Bushby. He was a very kind and gentle person and took huge pride in the garden which I think he looked after from the day the Bushbys arrived so in effect laid out and tended that garden as his life’s work.'

'Percy and older sister Florrie lived at Stable Cottage (before it was extended) and moved to The Lodge about the time of Mr Bushby’s death.

Florrie was what we termed in those days ‘simple’. She lived in a scruffy raincoat and a battered hat or tea towel on her head.  A large number of feral cats shared their dwellings. Percy had taken on the responsibility of looking after her when their parents died, hence he had been unable to marry his sweetheart, Linda.  In his younger days he used to cycle every week to see Linda in Christleton.  By the time we were at Sibbersfield he used to go on the bus.

Florrie died about the time my son Matthew was born in 1978. 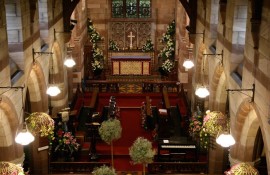 Percy continued to visit Linda and subsequently they were married, in Christleton Church.  We all went to the wedding (hence the photo below).  Linda was already suffering from Parkinsons and had to be wheeled up the aisle, but it was one of the loveliest weddings I have been to. They had been ‘courting’ for 35 years. 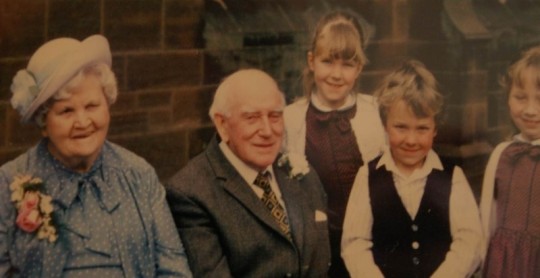 Percy and Linda Chaloner on their wedding day in May 1985. Thanks to Shirley Carter for the photograph

They lived in the sheltered accomodation in Christleton.  We used to visit them.  After Linda died we also used to fetch Percy to spend a day with us at Sibbersfield. He had quite an active social life in Christleton, and lots of friends.

As far as we are aware, his association with Sibbersfield which started in c1914, when Philip Holt owned the Hall and ended during Shirley Hancock's ownership, a total of 72 years, makes him the record holder! He arrived at the outbreak of World War One and left at the time of the Challenger disaster, a year that witnessed the return of Halley's Comet. 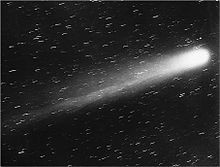 Halley's Comet Photographed on it's arrival 29th May 1910

Incidentally the Halley's comet, which visits every 75 years had last visited 3 years before Percy's arrival. There are some parallels with Mark Twain. (apart from the 'unaccountable freaks' comment of course)

At the time of Percy's arrival, American satirist and writer Mark Twain, who was born on 30 November 1835, exactly two weeks after the comet's perihelion, wrote in his autobiography, published in 1909,

'I came in with Halley's comet in 1835. It is coming again next year, and I expect to go out with it. It will be the greatest disappointment of my life if I don't go out with Halley's comet. The Almighty has said, no doubt: 'Now here are these two unaccountable freaks; they came in together, they must go out together.'

Cheshire village where David and Victoria Beckham lived is one of 'poshest' places in the UK (Thu, 18 Aug 2022)
>> Read more