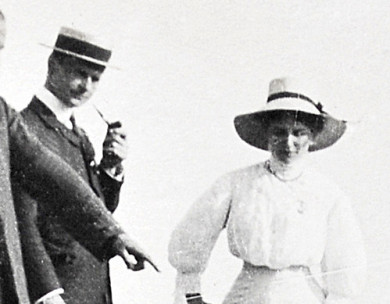 In 1931, the Sibbersfield estate was purchased by Dorothy Lina Bushby, known as Dora, for herself and her husband, Geoffrey Campbell Bushby. Geoffrey Bushby was a cotton merchant and the former captain of the Cheshire Tennis Team. Dora's father Franz was a well known Liverpool business man. Extensive details of his business life and family can be found here .

Geoffrey and Dora moved to Sibbersfield from The Old Parsonage at Gresford. The circumstances surrounding their move and details of their previous house can be found here.It makes very interesting reading.

We have been able to gather some lovely photographs and reminiscenses regarding all five.Please click on the names above for more information. 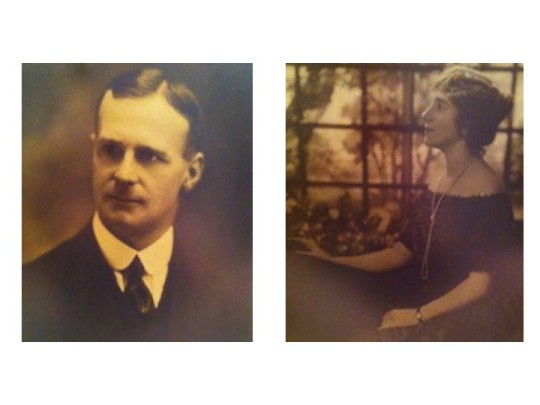 Mr and Mrs Bushby (taken in New York during their visit to New York on the Mauretania in Dec 1919, with thanks to Rob and Anne Burrows (* see below) who supplied the photographs) 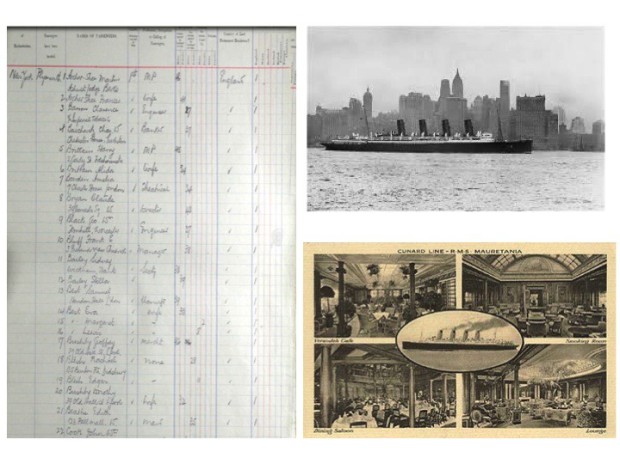 Both Dora and Geoffrey Bushby were active members of St Chad's church in Farndon. Mrs Bushby always sat in the very front pew for services and was responsible for arranging the flowers for the base of the window behind the altar. Apparently, she had a reputation for arriving late and the vicar would often wait for her before starting the service. Mr Bushby was a churchwarden for the year 1936-7.

During the Second World War, Alice and Kathleen Morgan of Liverpool were evacuated and lived with the Bushbys. A very detailed and interesting profile of their experience at Sibbersfield can be found here.

At some point whilst the Bushbys owned the Hall, famous children's author and illustrator Gladys Peto visited and painted what is now the rear of the property. 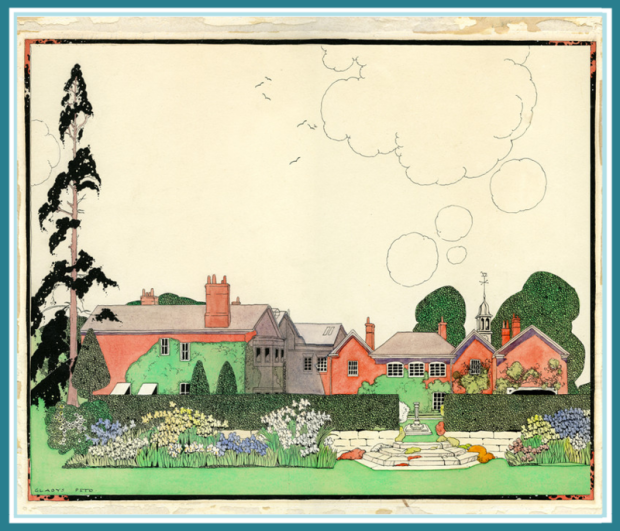 Geoffrey Bushby made some major changes to the Hall, including moving the front door from the west elevation to the north and constructing a ha-ha in the grounds. The soil taken from the excavation for the ha-ha was used to realign the driveway with the new entrance.

Bushby also commissioned Percy Cane, a celebrated landscape designer of the period, to design the garden. Cane is famous for designing the Addis Ababa palace grounds, Dartington Hall and Falkland Palace, amongst others. The Bushbys held an annual garden party for the people of the community for a number of years. 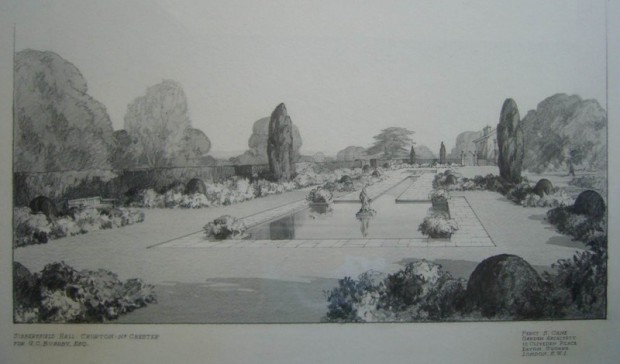 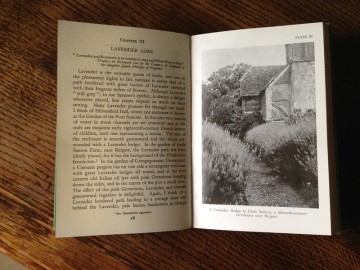 'Whether in stately gardens with their clipped yews, their lichen-stained walls, their air of peace and ordered ways, or in humble cottage plots, lavender, the queen of herbs, is equally at home -

Sweet and tall and slender,

Buouyant, and bold, and bluff,

Eleanor goes on to describe the 'Four Seasons Garden' at Sibbersfield.

'Many Lavender pictures flit through my mind.I think of Sibbersfield Hall, where one enclosure is known as the Garden of Four Seasons.In this plot two runnels of water in stone channels are set crosswise and at the ends are exquisite early eighteenth-century French statues of children, each one representing a season. The rest of the enclosure is smooth greensward and the whole surrounded by a Lavender hedge.'

Sibbersfield Gardens 1937 prior to the redesign by Percy Cane

The majority of work for this website was completed in the period 2007 to 2013 as after that we were finding 'new' material hard to find. Then out of the blue and thanks to the internet, we have made some real breakthrough steps forward.

When reading the above passage by Eleanor Rhode I never imagined that we would actually ever be able to see what the Four Seasons garden looked like, then thanks to Alison Haviland (daughter of John Read) in September 2018, a whole new batch of photograph of the garden from c1937 (pre the garden redesign) and 1938 (when the existing pond and garden layout was put in place) came to light ... 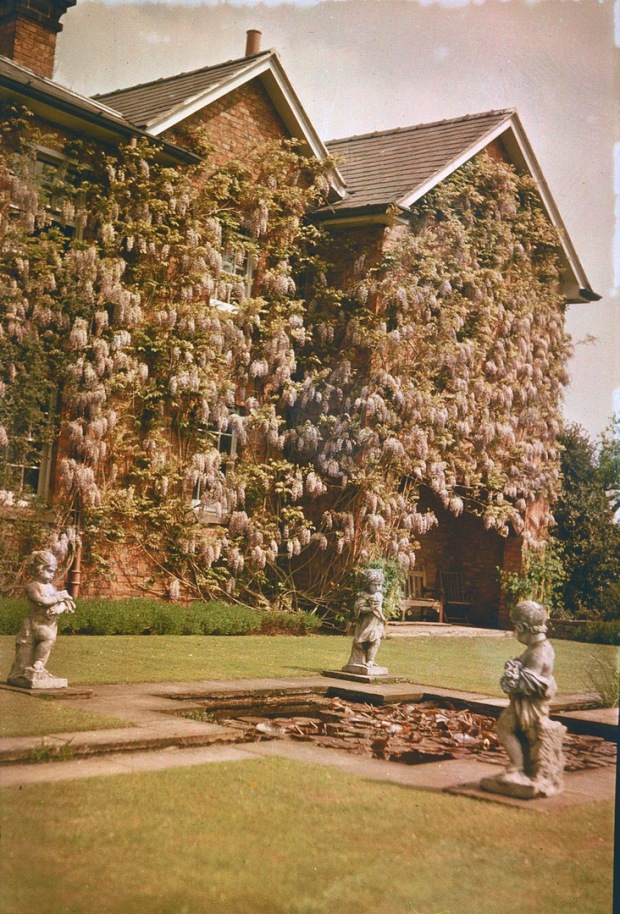 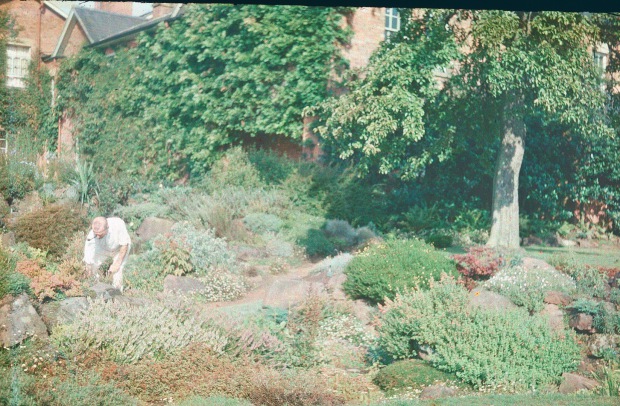 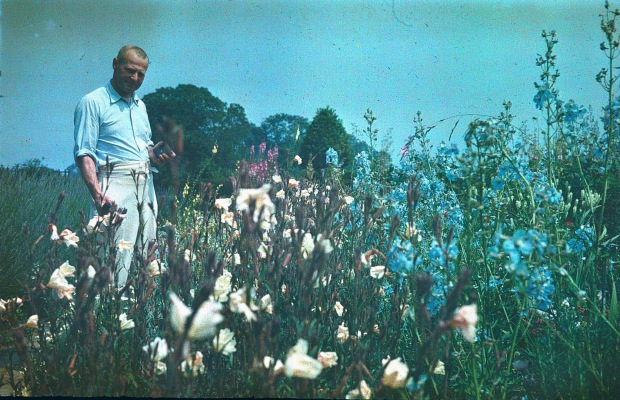 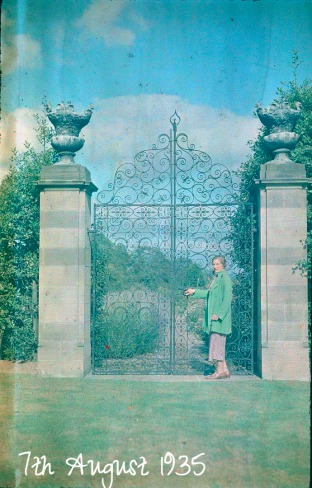 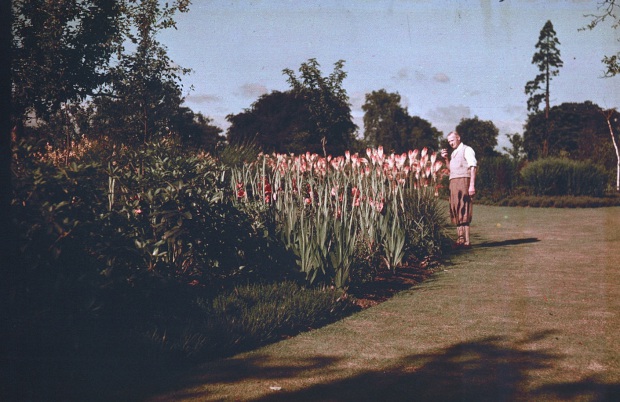 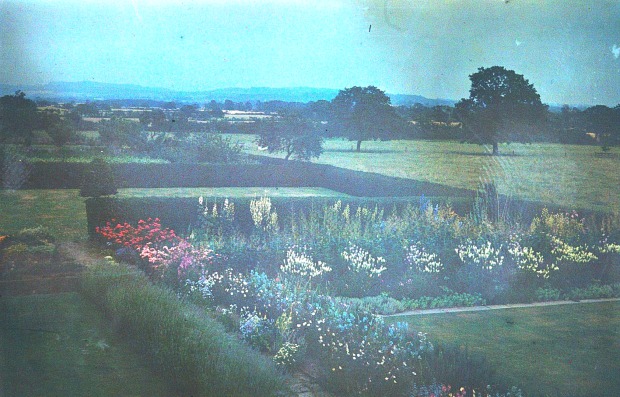 Screenshow of images from 1937

(please left click on any images you wish to pause on) 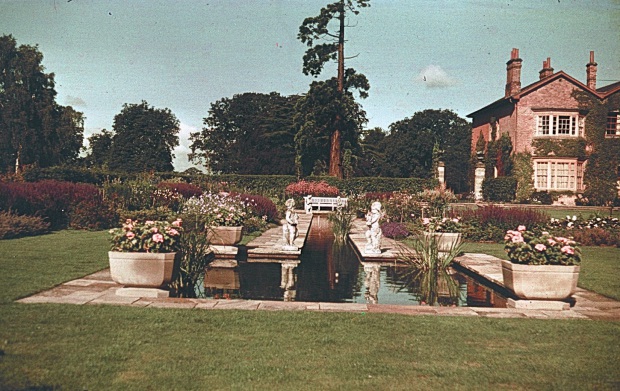 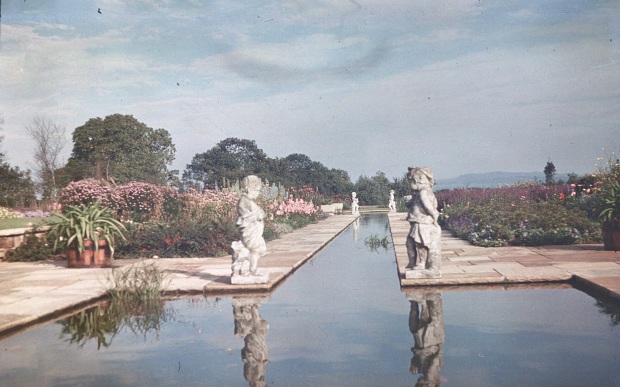 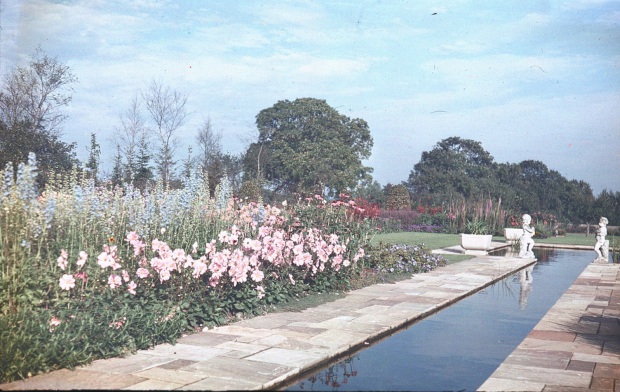 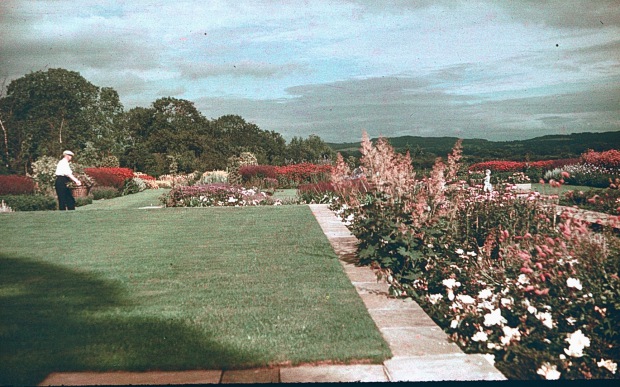 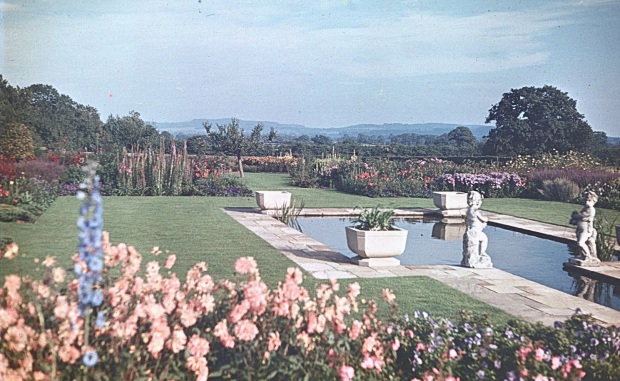 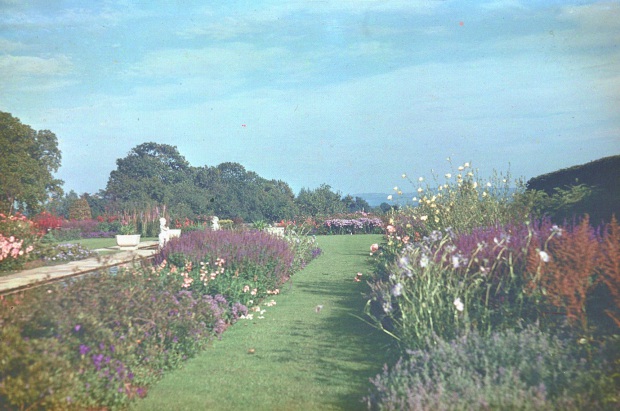 And a very rare internal shot of the Hall 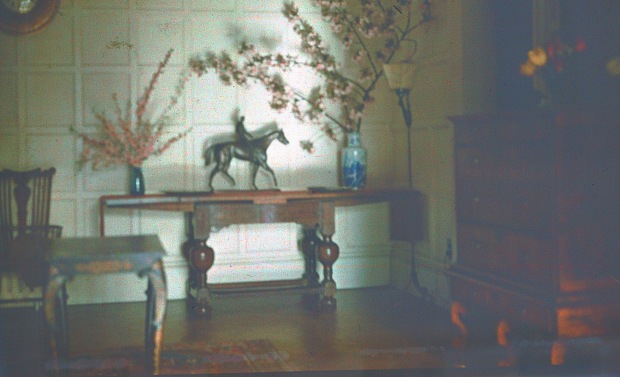 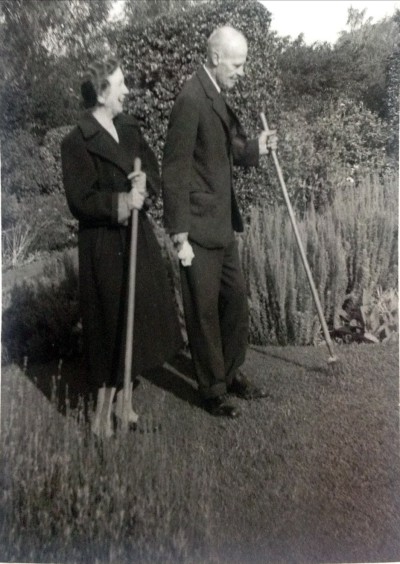 Mr and Mrs Bushby in later years in the garden in Sibbersfield. Thanks to Jayne Jones (* see below) who supplied this and the subsequent photos of the Youdes 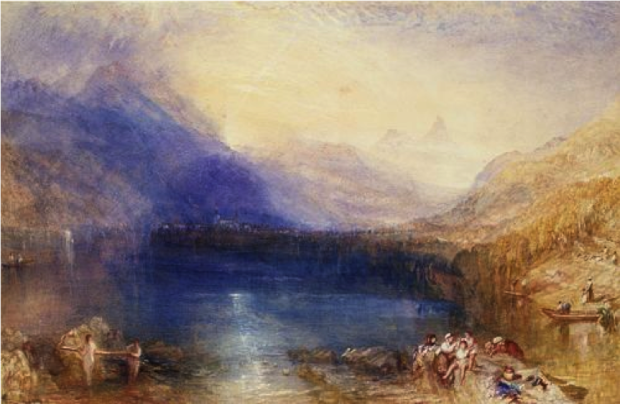 The Lake of Zug. Currently owned by The Metropolitan Museum of Art, New York.

From The Met website - Returning from an extended sojourn in the Swiss Alps, Turner solicited patrons for large watercolors to be based on sketches from the trip. This view was commissioned as part of the scheme by Hugh Andrew Johnstone Munro of Novar (1797-1864) in 1843, and was later owned by John Ruskin (1819-1900). Its accomplished rendering of light and atmospheric effects is characteristic of Turner's finest work. 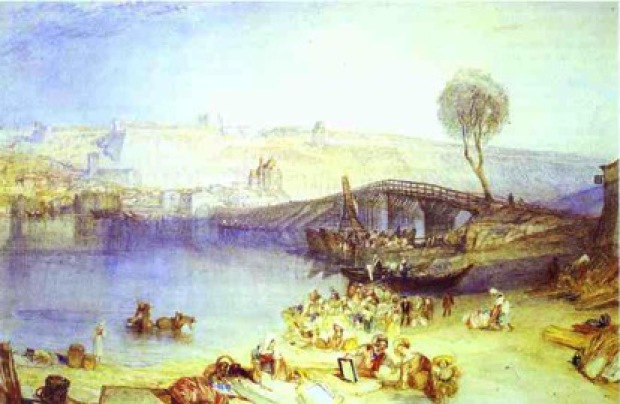 View of the Château de Saint-Germain-en-Laye.Currently owned by The Louvre, Paris.

From The Louvre website - This delightfully fresh watercolour once belonged to Hugh A. J. Munro of Novar, one of Turner's executors and keenest admirers. It is one of the seventeen watercolours printed in the annual magazine The Keepsake, which was very popular in England in the 19th century. Turner contributed to the magazine between 1828 and 1839. It was the first of his drawings to be purchased by the Louvre, in 1976.

Turner went to France several times after 1802. On each occasion he made short excursions, which gave him  an opportunity to note his impressions in his sketchbooks. These studies gave rise to very few oil paintings;  however, they were used for more finished drawings suitable for publication. This is the case with  View of the Château de Saint-Germain-en-Laye, which was engraved by Robert Wallis for the 1832 edition  of the annual The Keepsake. Château de Saint-Germain-en-Laye, a royal abode linked to English history because the Stuart king James II died  there, was in a pitiful state in the 1820s; only the terraces above the Seine still attracted visitors. For this view,  Turner positioned himself opposite the castle, near the river, accentuating the figures sitting on the river bank  and on the scaffolding on the bridge over the Seine. In the foreground, a woman is looking at what seems to be  a painting, no doubt an allusion to the castle's former splendor. Executed at a time of intense creative activity,  the watercolor is appealing in its flowing strokes and beautiful colors, dominated by reds, ochre, and yellows.  Bathed in light, this recollection of a journey heralds the boldness of Turner's evanescent, lyrical later landscapes. A colour study (London, Tate Gallery) in which the structure of the composition is obtained solely by the use of  plum and pink tones has been linked to this work. 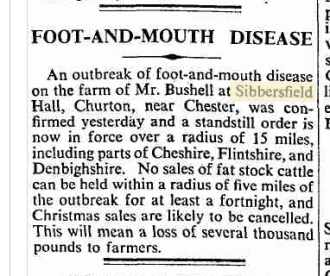 In 1937 some very bad news for Mr Bushby and the surrounding farms.

There were also some internal improvements made. The panelling in the Hall came  from the Bushbys' previous home The Old Parsonage in Gresford and the living room and bathroom were both redesigned.

Announcement of Geoffrey Bushby's death from The Times, 1974

* The photographs supplied by Jayne, Rob and Anne were from Jayne and Annes' Great Aunt Annie, known as Nancy.

'They were found when we were clearing my Great Aunt's house after she died many years ago. As far as we can remember, we think her brother was the butler and his wife was the housekeeper'

We also know from research carried out on the history of the Banford Haughton family that a Miss Majorie Smythe (1891-1956) lived at Sibbersfield Cottage from the 1930's.

What was happening in the world at large ?

Mr and Mrs Bushby observed many changes in the world during their 43 years of tranquility at Sibbersfield, from Adolf Hitler becoming Chancellor of Germany to the Moon landings ...