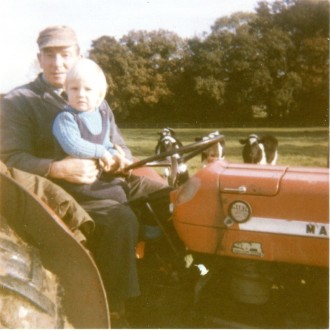 One of the great advantages of the internet is that it connects people who otherwise would have been unlikely to meet. One such case has arisen when Phillip Barnett of Cambridge, who's grandfather was a farmer at Sibbersfield spotted the Sibbersfield website and got in touch recently.

'I've just discovered your website, and wanted to say thanks....

I had many happy times at Sibbersfield, staying with my grandparents,  who were farmers at Sibbersfield Farm, until they moved out in about 1975, presumably when the estate was sold. I remember the fact of the auction (though I didn't attend, being too young

My grandfather was Reginald Arthur Wickstead (3/9/1919- Dec 1993), from Tittenley, just north of Market Drayton. He married Elsie Muriel Perkins (25/07/1921-2001) from Whitchurch in the autumn of 1939, when he was 20. He fought in North Africa, and told stories of driving lorries under bombardment, and accidentally parking in a minefield overnight. They had six children, my mother Jean being the eldest, and Dianne the youngest.

Only Dianne actually lived at Sibbersfield, although all the others and their children, my cousins, would certainly have visited at various times.

The family moved around various places in Shropshire, Cheshire (and for a couple of years, Canada) as he took various farming jobs. Adderley, Audlem, Market Drayton, Bridgemere etc. I believe he became the tenant farmer at Sibbersfield from about 1970 to 1975, but may be wrong. Certainly I recall the end of that period, and I have attached a photograph of him on his red Massey-Ferguson tractor, which I remember well, with, if you look closely, a tax disc expiring March 74. The slightly yellowing foliage on the trees, and the folded coat, and clothing of my cousin Jonathan Holland (1971) (Audrey's son), indicate it would have been taken in Autumn 1973. The writing on the back says 'Jonathan & Grandad taken at Sibbersfield Farm' in my grandmothers handwriting. In the background is a small copse of trees, which may be the ones I remember being at the bottom of the second field out of the farmyard. They lived with their youngest daughter, Diane, my aunt, who now lives near Ruthin, in the end cottage in the farmyard, past the dairy. (My mother says they originally lived in the cottage at the top of the farmyard) Dianne had a black and white horse called Freddy Fox, which was stabled at the farm. I would visit the farm at holidays, and stay for weeks in the summertime with my brother Stephen, and sister Vanessa. We would run wild across the farm, playing in the copse, near some scary deep ponds, in the hay barn opposite the house in the farmyard, and in the walled kitchen garden (garden peas, and hollyhocks) at the back of the house. I remember the clock tower, and the driveway past the stables, and occasionally we would circle round the fields and climb the ha-ha onto the house lawns, though we were always warned against going too far towards the house where Mr Bushby lived. I can't recall ever meeting him, but Mr Matson loomed large in our mythology -  he was the link to the estate. My mother tells me that he always provided a large turkey at Christmas. Us three children would all share a large bed at night, up the dimly lit stairs, and hear the grown-ups talking in the kitchen. Very atmospheric! There was a piano in the parlour, which we never spent much time in - the kitchen was the focal point, as is usual in the country! We would drive into Farndon occasionally, and go past a large memorial near Churton sometimes, possibly while embarking on shopping trips to Wrexham.

When the estate was sold, my grandparents moved down the lane to The Laurels, where I continued to visit at holiday times. I think he worked for a local farmer until he retired. I remember the housing estates encroaching across the fields from Farndon - not a development I welcomed. In the late 80's they moved to Stafford, where my parents live.

I've always had a liking for the local style of white, wrought iron fencing ever since…'

Man and woman in hospital after falling from escalator at retail park (Mon, 25 Oct 2021)
>> Read more