George Broadhurst started working as a farmer at Sibbersfield in c1936.They lived at Grace Cottage Sibbersfield for c22 years before ill health led them to retiring to Tilston in c1957. George and Violet had three children, Ken, Audrey and John. John was born at Sibbersfield in 1943 and still lives in Farndon and has kindly supplied us with the photographs below and some reminiscences from a boys perspective, of growing up in Sibbersfield in the 1940s and 50s. 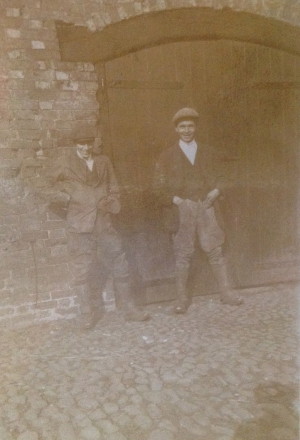 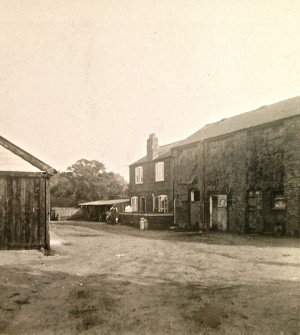 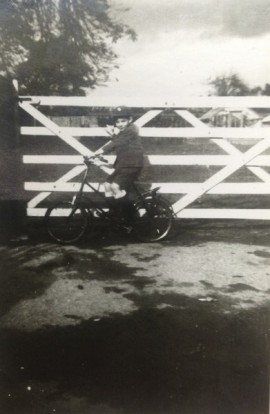 This is a photograph of John leaning against the gate to the greenhouses and walled garden.

John recalls that the walled garden had some very good apples, peaches and greengages. He had to avoid being caught picking them by Mr Youde who could be severe in his punishment! He also recalls the walled garden containing many Sweet Williams, they were a personal favourite of the Bushbys.

The paddock in front of the greenhouses contained pigs. John recalls releasing them on one occasion as revenge for the punishment he received for a previous misdemeanor.John also recalls Mrs Bushby saying 'You have been a very naughty boy' after the pig incident.

John remembers that Mrs Bushby used to love wearing very long beads that almost reached to the floor when she leant forward when weeding.

He recalls Mr Busby in particular often carried a hoe with them when walking through to the walled garden. he detested weeds and would stop to remove them regularly on his walks around the garden.

John in the stable yard

This photograph was taken near the base of the clock tower in the stable yard.

John remembers a Mr Partington living in Stable Cottage before Percy moved in. Mr Partington was a former policeman, John remembers him as very large man and him going to work in a long black coat and a trilby hat.Mr Partington's wife was an invalid and sadly confined to bed. John recalls that they had two children Michael and Ann (?)

John recalls shooting the weather vane horse and making the bell ring with an air rifle.Presumably when Mr Partington wasn't around ! 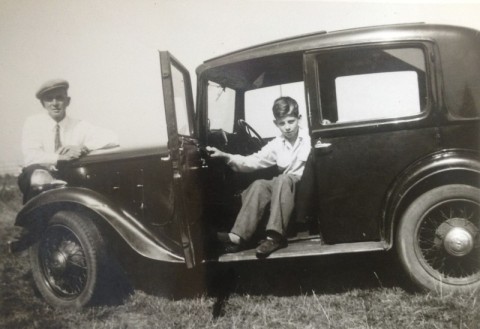 George and John Broadhurst with their Austin 12 at Sibbersfield. John can still remember the number plate to this day - BG 2838 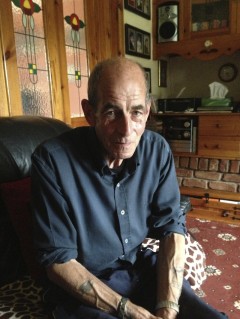