George Knowles sold the Hall, cottage and gardens for £40,000 in July 1975 to two couples: Mike and Shirley Hancock and Will and Sylvia Parsons, between whom the lot was divided.

The Hancocks bought the half of the Hall that retained the name Sibbersfield Hall and Stable Cottage for £22,500. They refurbished the Hall and lived here with their two children: Emily and Matthew. In 1979, they refurbished and extended Stable Cottage. In around 1985, a conservatory was added to the Hall.Shirley lived at Sibbersfield for 28 years.

The Parsons took the other half of the Hall, newly named as Sibbersfield House, Grace Cottage and the Percy Cane garden for £17,500. In October 1975, the Parsons sold Grace Cottage to Chris and Kathryn Quartermain. The Parsons lived in the House with their three children: Richard, Christopher and Sarah.

In 1983, The Parsons sold Sibbersfield House to John and Anne Read.

The Reads sold Sibbersfield House to Richard and Sue Parkes in April 1986. The Parkes live here, originally with their three sons, Gareth, Jeremy and Craig. Their profile can be found here. 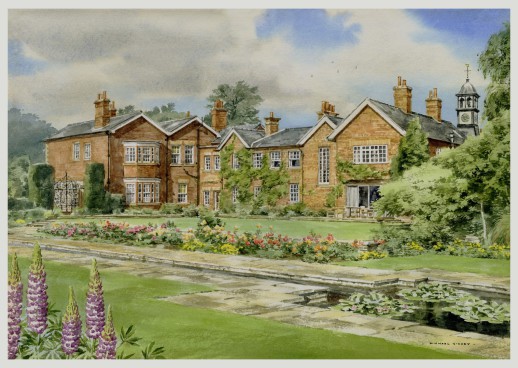 After its refurbishment in 1979 by the Hancocks, Stable Cottage has been rented to a number of different individuals and families, including Roger and Maureen Bayliss, Mike Harrison, Paul and Maggie Bristow and their sons Seb and Ben, and Colin and Helen Wicks.

Chris and Kathryn Quartermain bought Grace Cottage from the Parsons in 1975. They lived there with their two daughters, Becky and Lucy, until 1984. Elizabeth Roberts then lived in the Cottage until 1989, when Diana Mander and Bill Stanhope moved in. Their profile can be found here.

The Lodge was the home of Percy Challinor, the long-standing gardener, until 1985 when he moved out of The Lodge to get married for the first time after a 40 year long engagement. It was purchased by John and Brenda Bradley, who completely refurbished and extended the property. Their profile can be found here.

In 1975, Andrew Wilson bought Sibbersfield Hall Farm at the auction. He lived there with his wife Val and two children, Fraser and Charlotte. After about three years, the Wilsons sold the Farm to John Bigland, who owned it for around 18 months before it was sold to Tony Brassey in 1980. Mr Brassey lived at the Farm with his wife Bridget and four daughters: Susan, Caroline, Mary and Rachel.

Mike and Vera Hancock bought Sibbersfield Hall Farm from Tony Brassey in around 1987, and sold it to David and Audra Noel the following year.

Geoff and Sue Moss purchased the farm from the Noels in 1989 and carried out very extensive renovations to the buildings and gardens.

In 2003, David and Pauline Williams bought Sibbersfield Hall from Shirley and Bob Carter. David and Pauline have four children: Lydia Jane, Harvey David, Hugh Alexander and Henry (Harry) Richard. They replaced the bathrooms and removed the chimney between the cloakroom and utility room in 2007 to form the existing kitchen.In 2013 the garage was built.