On Joseph Parker's death in 1884, his trustees decided to sell the estate. An advert for the sale appeared in the London Times on 31st July 1884. Bidding started at £3000 and the estate including 60 acres finally sold for £7300.

The buyer was Robert Spear Hudson, who purchased the property for his son Robert William. (see below)

R.S. Hudson founded Hudson's Soaps. A chemist and druggist, he first owned a small shop on High Street, West Bromwich, England. In 1837, he was experimenting with bars of soaps and started grinding them into a powder using a pestle and mortar. He sold this new "soap powder" in his shop.

Initially the production line consisted solely of Hudson, but by 1854 he had hired ten female employees and by 1875, Hudson had opened a main factory at Bank Hall, Liverpool, England. This was conveniently close to his source. Although he retained his shop on High Street, he located his head office in Bootle, England. His business continued to grow and Hudson eventually employed around 1000 people.

The secret behind the success of Hudson's soap powder was that it offered convenience. Previously, women had been spending hours shaving and grinding the bars into their own flakes or powder. Hudson's product allowed them to save time and energy and they flocked to buy his merchandise. 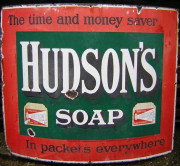 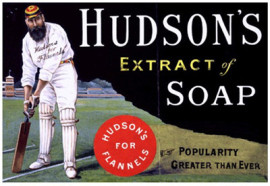 Hudson knew how to attract customers. He had marketing campaigns to promote and boost the sales of new products. Strongly crafted posters, the creation of professional artists, boasted the wonders of Hudson's products. Hudson often used slogans and catchphrases, the most memorable being "A little of Hudson's goes a long way" and "For Washing Clothes. Hudson's Soap. For Washing Up." Hudson promoted on and in various media including horse-drawn coaches and horse-drawn, steam and electric tramcars.

Hudson traded extensively. His soap and soap powders found markets at home and abroad. He ran a flourishing export trade to New Zealand and Australia. Hudson was succeeded by his son, Robert William. He ran the business successfully until 1908 when he sold it to Lever Brothers. Lever Brothers ran the company as a subsidiary. The name, however, remained unchanged until 1935, the year Levers closed the West Bromwich and Bank Hall works. 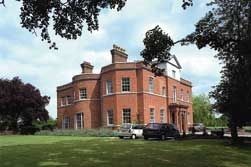 Hudson was the son of Reverend John Hudson and Sarah Spear and married Mary Bell, a poor farmer girl who made her living selling goats milk to locals in 1854.

They had 6 children. Mary died in 1860 and in 1868 Hudson married Emily Gilroy in Donnybrook, Dublin. Their Chester home,Bache Hall, was at that time situated in rural surroundings outside the city. The original house on the site had been damaged during the Civil War and, when Hudson moved in, it was a plain 18th century brick-built building of two storeys and 5 bays. During the time he lived there, Hudson made improvements including adding an Italianate porch.Hudson died unexpectedly of a heart failure Scarborough in 1884, leaving a personal estate of just under £300,000, a substantial part of which was given to churches and charities. Emily continued to live in Bache Hall until her death in 1901

After his death in August 1884 and his son inherited Bache Hall, in Chester, rendering Sibbersfield surplus to requirements. It is not known whether any member of the Hudson family actually moved in at the Hall. The 'gift' of Sibbersfield Hall was the subject of a subsequent court case featured in the Chester Observer February 7th 1885

Further land from the estate was sold in 1887 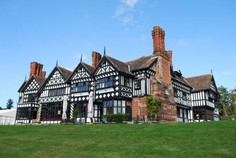 Robert William Hudson (1856–1937, Age 81) was born in West Bromwich, the eldest son of Robert Spear Hudson.Hudson managed his father's company until it was taken over by Lever Brothers Ltd in 1908.

He built a house called 'Bidston Court' on Bidston Hill in Birkenhead in 1891 in Birkenhead. It was designed by Edward Ould, who also designed some of the houses in Port Sunlight Village, it was inspired by 16th century Little Moreton Hall in Cheshire. Germany's Crown Prinz Wilhelm was so impressed with the house that in 1913 he built a similar house, the Cecilienhof in Potsdam.

The house was sold in 1921 to Sir Ernest Royden and in 1928 it was moved to its present site at Royden Park, brick by brick, finally being completed in 1931. (See below dismantling video) There it was renamed Hill Bark. The original site of the house on Vyner Road South was given to Birkenhead Corporation and became a public park in 1969.

Hudson moved to Danesfield House in Buckinghamshire where he became High Sheriff in 1903. His first marriage was to Gerda Frances Marion Bushell (d 1932). Among their offspring was Robert Spear Hudson, 1st Viscount Hudson. He married Beatrice Sabina Gaudengio, daughter of Laurenzo Gaudengio, in 1932.

The Dismantling of Bidston Court 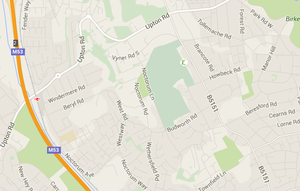 He was the eldest son of Robert William Hudson who had inherited the family soap business and sold it, and Gerda Frances Marion Bushell. Hudson was educated at Eton College and Magdalen College, Oxford. He entered the Diplomatic Service in 1911, becoming an attaché and first minister before entering politics.

Hudson was elected as Member of Parliament  for Whitehaven in 1924 and served there until losing in 1929.In 1931 he was returned for Southport.He served in several ministerial posts, becoming a Privy Counsellor in 1938 and the Minister of Agriculture and Fisheries in 1940, a post he would hold until the 1945 election. In the opinion of Edward Turnour, 6th Earl Winterton, Hudson "was by far the best of Ministers of Agriculture in either war...he was determined to see that farmers and landowners alike utilised every acre of soil to help keep the nation from starvation".

He had a particular interest in farming and was a member of the council of the Royal Agricultural Society.

Hudson was created Viscount Hudson in 1952. 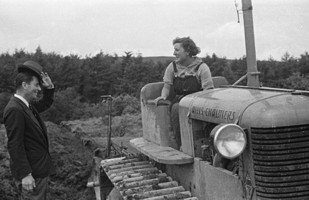 Ruth Lloyd, an undergraduate student in Oxford, is seen speaking with, Mr R. S. Hudson, Minister for Agriculture, in June 1941. Ruth had sacrificed her degree course in Oxford University to work on the Dolfor scheme. 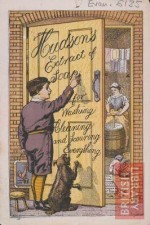 Cheshire village where David and Victoria Beckham lived is one of 'poshest' places in the UK (Thu, 18 Aug 2022)
>> Read more