Philip was 38 years old when first linked with Sibbersfield Hall.Philip and Phyllis lived at Sibbersfield for c 17 years. 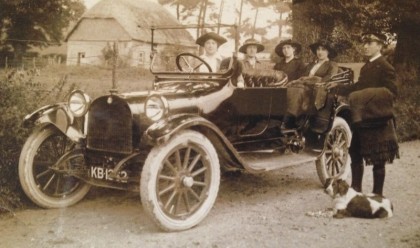 (All the photographs of Sibbersfield, Mrs Holt and members of the staff on this page were supplied by Peter Jackson whose wife's mother was Emily Edwards.Emily Edwards worked as a housemaid at the Hall from leaving school in c 1909 to her marriage in 1922.

Peter has also discovered with some help fom the British Motor Industry Hertage Trust that the car was registered in Liverpool.The model was first made in Detroit in 1912.)

In 1914, Kelly's Directory lists Philip Durning Holt as the owner of the Sibbersfield estate. He was a practising barrister and a cotton merchant. He was appointed Sheriff of the County of Chester in 1928. 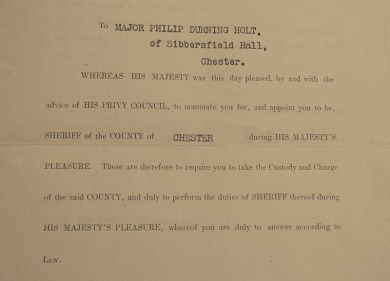 Appointment of Philip D. Holt to be Sheriff of the County of Chester 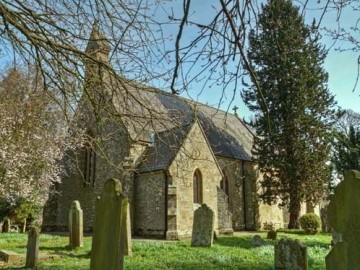 Phillip and Phyllis were married on the 19th November 1908 in St Peters Fourstones, Newbrough, Northumberland.Philip was 32 and Phyllis 20 at the time.Phyllis lived in Newborough Lodge prior to the wedding.

Both Philip and Phyllis came from famous ship building families, the Holts from Liverpool and the Palmers from Newcastle on Tyne.

The wedding was reported by the local paper -

'A pretty wedding, which attracted a considerable amount of interest, throughout the County of Northumberland, was solemnised yesterday at St. Peter's Church, in the picturesque south Tyne village of
Fourstones.The contracting parties were Mr Phillip During Holt, third son of Mr Richard Holt, of Ullet Road,Sefton Park, Liverpool, and brother of the member of Parliament for the Hexham Division; and Miss Phylis Adela Palmer, eldest daughter of Mr, and Mrs. A. M. Palmer of Newbrough Lodge, Fourstones,and grandaughter of the late Sir Charles Mark Palmer, who for so many years represented Jarrow in Parliament
For this time of the year, excepionally fine weather favoured the happy event. After a deluge of rain overnight, the sun burst early through the ominous clouds that obscured the horizon, and before midday the sky was an expansive streatch of ethereal blue.Throughout the day, in fact, the sun shone, not with much power, it is true, for the atmosphere was distinctly "nippy," but with conspicuous brightness and geniality, and, bathed as it was in this flood of light, the countryside, which hereabouts is noteworthy for nothing so much at this season of the year as its gloriously resepledent autumn tints, the whole scene in its panorama of beauty and brightness, presented as admirable and incomparable setting to the day's happy ceremony.
It is not a large place, Fourstones, and anything in the way of a big display of rejoycing though the customary medium of bunting, was neither attempted nor desired. When Nature provided so luxuriant a scene, anything artificial would have been sadly incongruous, and would have spoiled the picture undoubtedly. An inofensively artistic flag harmlessly obtruded itself upon the landscape here and there but that was all. The villagers were content to show their rejoicing and good wishes by beaming faces and lusty cheering. Than Miss Palmer no bride could have had "good luck" more sincerely and felicitously expressed.The church was crowded, and the service was fully choral, The organist Mr Butland, played Lefebure Wely's Andante as the voluntary and the opening hymn was "Gracious Spirit, Holy Ghost" the Psalm was "Blessed are they that fear the Lord," after
which followed the hymns "0 Perfect Love, and "Lead me, Lord, lead me" The bride who was given away
by her father, was attired in a white satin gown, embroidered with pearls her chief ornament consisted of large and handsome pendant formed of diamonds and topaz which belonged to Mr Holt`s mother. She carried a bouquet of Madona lillies,She was attended by six bridesmaids, Miss Evaline Palmer. Miss Watson, Miss Norah Dillon, Miss Holt,Miss Gladys Palmer, and Miss Audrey Palmer, all of whom were attired in Empire satin gowns with white fichus and pale blue sashes. They wore black hats with large feathers, and pearl and peridot brooches, the gifts of the bridegroom. The bride's mother wore a grey cloth gown, embroidered with silk and gold.The best man was Mr. Lawrence Holt, younger brother of the bridegroom, and the officiating clergy were the Rev H Suttery, vicar of Warden, the Rev Dr F. W. Westgarth, vicar of Nenthead;and the Rev. T. J. Walker, curate of Newbrough. As the bridal party left the church the organist played Mendelssohns 'Wedding March" After the ceremony a reception was held on the lawn at Newbrough Lodge, and later in the day Mr and Mrs. Holt left for London, enroute for Egypt

'The portrait of Major Philip Holt's wife of 1916 is another refined portrait of a lady, painted in the style of Romney. Miss Phyllis Adela Palmer married in 1908 Philip Durning Holt, nephew of George Holt of Birkenhead, a shipping company owner who accumulated a notable collection of modern art, which remains at Sudley House.She also had been painted by William Blake Richmond and was a great beauty. Draper's portrait was painted for Sibbersfield Hall, the Holt's home in Churton in Cheshire, close to the The Duke of Westminster's gothic country estate.Unfortunately the elegant opulence of the Holt's lifestyle, suggested by the portrait, failed to endure and they were forced to sell Sibbersfield after losing a great deal of money during the Depression.

Draper contrived the costume worn by Phyllis in her portrait, but vowed never again to allow himself or his sitters to invent dresses for his portraits, as he felt it was important  to depict his patrons in costumes which he could observe in reality.'

In 'William Blake Richmond, An Artists Life 1842 - 1921" Simon Reynolds writes ' A photograph exists of an unexhibited and undated portrait, Mrs Holt no doubt of the Liverpool shipping family, full face and with an embroidered dress (whereabouts unknown).

William Blake Richmond is best known for his controversial decorative plan in mosaics for St Paul's Cathedral executed between 1891 and 1904. He was an outstanding portraitist - Gladstone and Bismark where among subjects, as well numerous beautiful women in Aesthetic society and their children. 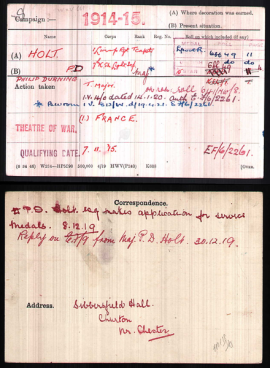 In stark contrast the image of 'elegant opulence' shown above, we know that Philip served as a captain in the 1st Liverpool Regiment, in France from 1914 to 1918.

He wrote home many times from The Front. His many letters and sketches from 1916 to 1918 can be found here. 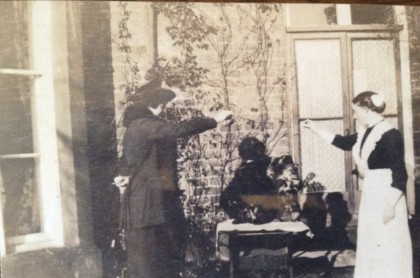 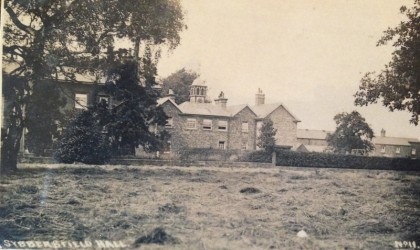 Sibbersfield during the first world war. This photograph is from a postcard written by Emily Edwards to her husband to be (contents below) 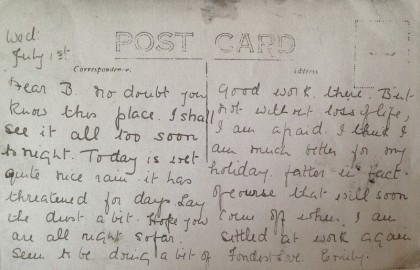 No doubt you know this place.I shall see it all too soon tonight.Today is wet, quite nice rain, it has threatened for days. Lay the dust a bit. Hope you are all right so far.Seem to be doing a bit of good work there. But not without loss of life.

I think I am much better for my holiday, fatter in fact, of course that will sooon come off when I am settled at work again.

Philip and Phyllis had three children 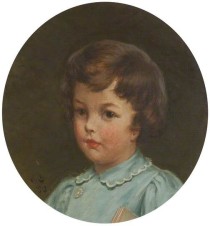 John Charlton was one of Britain's preeminent 'battle' painters of the late Victorian period.He was born at Bamburgh, Northumberland and received his first drawing lessons from his father. At the suggestion of Joseph Crawhall he enrolled as a pupil at the goverment School of Art under William Bell Scott.

Charlton settled permanently in London and exhibiting at the Royal Academy until 1904 by which time he had contributed 53 works. Later he concentrated on portrait, figure, battle scenes and landscape painting.

This painting along with that of his mother above, is currently (2013) at Judges Lodgings, Church Street, Lancaster, Lancashire, England, LA1 1YS. The museum also has several pieces of furniture belonging to the Holt family bequested by George.

The Head of a Lady by Alfred William Hunt

George bequeathed The Head of a Lady to The Walker Art Gallery.

A Liverpool artist, Hunt was the only surviving son of landscape painter Andrew Hunt (1790-1861).

Philip Holt also owned The Old Harbour (Naples) by J.M.W.Turner.Inherited from his father Robert Holt and left to his daughter Evelyn.Robert owned the painting from 1866 until 1906, Philip in turn owned it till 1944. Evelyn was the final family member to own the painting, it was given to the nation inlieu of inheritance tax and is now owned by the Walker Art Gallery. The painting is not currently on display. (2014)

The watercolour shows the view looking along the quay with the Castel dell 'Oro on the right, shipping seen on the left and the Hill of San Martino in the distance. There are many people on the quay itself, and the sails of several boats on the right of the image.The watercolour is based on a drawing by the architect James Hakewill (1778 – 1843). He had commissioned Turner to translate his sketches of Italy into a series of prints for his book 'A Picturesque Tour of Italy', published in 1820. Turner’s watercolour demonstrates his ability to encompass the grandest landscape ideas on the smallest scale.

Turner had not visited Italy when he made this watercolour. He may have been inspired to do so after Hakewill’s commission. He spent the summer of 1819 touring the country, including Naples.

We also know thanks to some help from Peter Jackson, that Philip and Phyllis also employed a fearsome cook, Mrs Seidler! In July 2017 we heard from Mrs Seidlers, Great Grandaughter July Cottom -

'I came across the Sibbersfield website thanks to a watch which used to belong to my Great Grand-mother, Anna Seidler, which is engraved 'From us all at Sibbersfield 1930'. Anna was a cook and it was so nice to read some comments giving us an idea of her character (she apparently ruled with a rod of iron!) We know that she came to England from Germany when she was about 18 years old and was cook in several big houses, latterly for Lord & Lady Trevor at Brynkinalt Hall, Chirk, where she remained until her death in 1955 at the age of 86.' 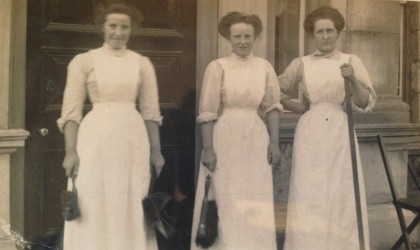 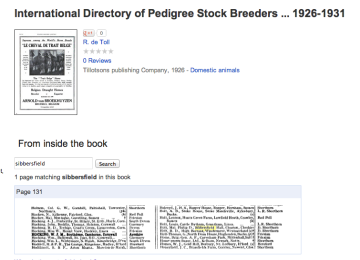 In 1923 Phyllis christened the SS Meriones built by her families firm. The ship came to a dramatic in end in WWII. click here for the full story 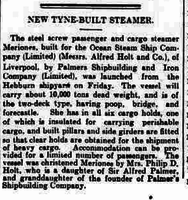 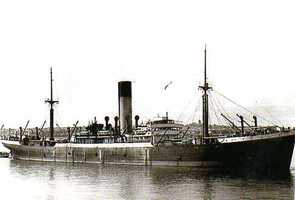 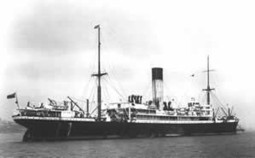 We know from the UK Outwards Passenger Lists that Phillip and Phyllis travelled extensively. 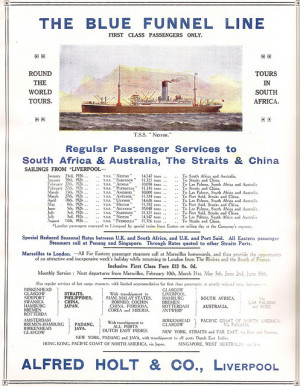 'Unfortunately the elegant opulence of the Holt's lifestyle, suggested by the portrait, failed to endure and they were forced to sell Sibbersfield after losing a great deal of money during the Depression.'

From 1929 to 1930 Philip was the President of The Liverpool Cotton Brokers Association. The immensely challenging trading conditions he and has colleaques faced, alluded to by Simon Toll above, are graphically captured on their website-

'World War II was a turning point for the Lancashire Cotton Industry and the Liverpool Cotton Market. The demand for cotton in India and China was now being met by the mills of Japan and India. Lancashire could not compete with their cheaper labour and products. Its Far East market collapsed and cotton imports to Liverpool halved. Further problems came with the decimation of the American crop of 1921 by the ravages of the Boll Weevil. The Wall Street Crash of 1929 brought with it the Great Depression and the effect on the Liverpool Cotton Market was severe: in 1931 Liverpool’s cotton imports were at their lowest for 62 years.'

The floor of the existing living room in Sibbersfield Hall is made from Orinoco Pine, which it is believed the Holts imported. The timber is marked "Holts'".

Philip Durning Holt lived at Sibbersfield for seventeen years before moving to Bulkeley in 1931.